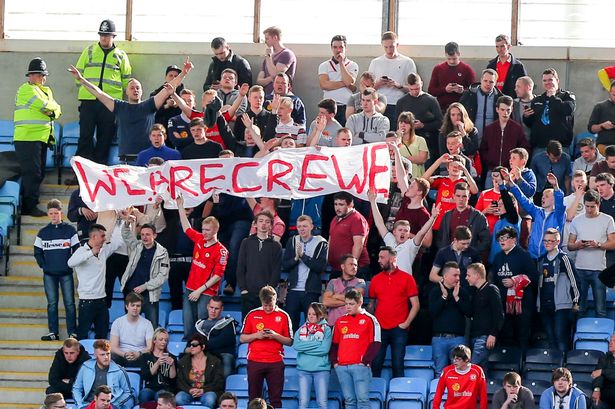 This looks like being a great season for the Alex. A potential promotion season and not just via the play-offs either. It also feels like we could even win League Two. Good Cup runs too, have helped the positive vibe.

However I have a feeling that there is a Glass ceiling, and that the achievements of smaller clubs are becoming increasingly limited.

The Championship is full of ex-Premier League teams with Parachute Payments and Rich Foreign owners. The sort who will call for Premier League 2 and less relegation but more TV money.

However I am proud of our club. We play good football (amazingly good at times). We are well run and do not live beyond our means. Youth is given its chance. It may be that I will never see Crewe play in the Championship again. But in many ways that doesn’t matter. I don’t want to see the club lose its heart.

I see our way forward as a bigger and better “Football and the Community” set up – something to be equally proud of. If I’m honest I think I would rather see us win Community Club of the Year than struggle at the bottom of the Championship.

The Foodbanks have started the ball rolling. The response has been excellent and with more publicity and organisation I am sure they will do even better in 2020. That shouldn’t be the end of it. There is so much more we can do.

Dementia suffers are said to benefit greatly from working with sports memories and our club is an ideal place to set up and work on such a project (maybe in conjunction with other parts of the community).

Maybe we could run a match day crèche (No I am not on about the latest youth players coming through!)

Gresty Road like many stadia is underused for its size and is well located. This gives us scope to start several community projects as the years go by.

For many supporters ambition is only measurable by how much is spent on the team and how many signings are made. At Crewe that is less obvious but still there and it’s useful to always remember Bury – promoted and then gone. Too much spent, too many signings!

Using #Project250 – we can build a community trust and club (with or without our shareholding), something to be immensely proud of. This doesn’t mean I don’t want promotion and I don’t dream but it’d not be the be all and end all of how I see our club.

“There’s no room for sentiment in football” – heard it a lot – read it again recently. What rubbish! If there was no sentiment I’d have ditched the Alex several times down the years. No it’s the Alex for me – always will be. I just want the best version possible on all fronts.

Written by Richard Benson, from the Railwaymen Supporters Society.