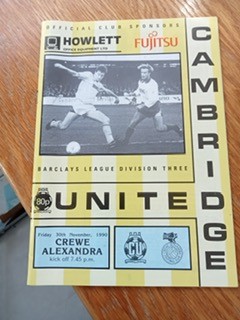 After the disappointing display in our previous away match at Shrewsbury Town, Dario Gradi admitted he was in a mood more of hope than expectation before the game.

In front of 4729 the Alex lined up- Edwards,Swain, Lennon, Callaghan, Carr,Smart,Hignett,Rose,Sussex, Clayton,Ward. Substitutes Mckearney and Edwards.

Despite having a midfield trio of Rose, Lennon and Hignett with an average age under 20 we produced a stunning fightback to win 4-3 with goals from Mitch Ward, Craig Hignett, Neil Lennon and an own goal.

Although unhappy with the Cambridge goals manager Gradi felt we had it in us to score and score again. We simply set our stall out to play more football in the opponent’s half as you get no points for 65 passes in your own half !

The goals were shown on the Saint and Greavsie show the next day with the famous catchphrase “football’s a funny old game” !!”