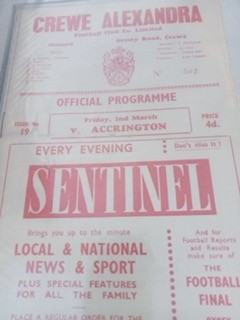 On Friday 2nd March 1962 Accrington Stanley travelled to Crewe for what turned out to be their last league game. In wintry conditions close to a snow storm Barry Wheatley shot the Alex ahead on 24 minutes and Frank Lord headed the second midway through the second half.

Ron Smith and Lord both scored again in the last five minutes to complete a 4-0 victory in front of a gate of 4272.

Stanley resigned from the league with estimated debts of £63000 and wouldn’t return until 2006 when in a reversal of fortune,they replaced Oxford United the team that had been elected to replace them in the summer of 1962.