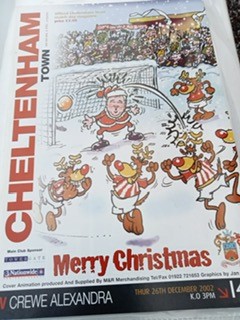 Cheltenham Town versus Crewe Alexandra will always be remembered for the unforgettable Sunday in May 2012 but I’ve chosen a different rewind for this particular fixture.

Back to boxing day 2002 and our first ever visit to Whaddon road for a second Division game.

In front of 5548 spectators (including a large away contingent) we raced into a three goals lead inside forty minutes with strikes from Dean Ashton, David Vaughan and Rodney Jack. The match report described Jack’s goal as having the locals drooling as he ran half the length of the pitch before curling in a terrific shot.

Cheltenham’s cause wasn’t helped by the sending off of Neil Howarth and current manager Michael Duff in the spate of ten second half minutes.The 4-0 victory was completed from the penalty spot by captain Dave Brammer late on.

The 2002-2003 campaign would be a memorable season as the Alex were promoted in second place behind champions Wigan Athletic.

Another memorable statistic from the season was a hat trick with a difference- three visits to Vale Park in the league, league cup and FA cup and three victories!!!