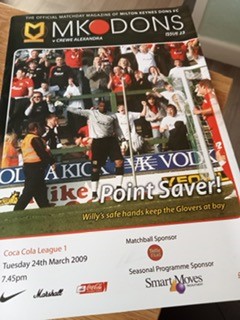 Back to the 24th of March 2009 and our first visit to the impressive Stadium:MK for a Sky Bet league one fixture against Roberto Di Matteo’s Milton Keynes Dons.

In front of 8454 the Alex lined up- Ruddy,Brayford,Woodards, Broomes,Baudet, Sheehan, Carrington,Sigurdsson, Donaldson,Pope and Grant. Substitutes were Collis, O’Donnell, Moore, Miller and McManus. As usual a large Crewe contingent made the journey as is the norm for a “new ground” but we found ourselves 2-0 down after 19 minutes to goals from Aaron Wilbraham and Jason Puncheon. Mark Carrington pulled a goal back with a 77th minute header and the comeback was completed with a penalty converted by Gylfi Sigurdsson three minutes later. The point gained moved the Alex up to 17th and four points above the drop zone but relegation would be confirmed on a Friday night in Stockport for Gudjon Thordarson as his team failed to win any of their remaining games.